More evidence has emerged that the Tsanaev brothers are innocent patsies, not terrorists.

Today's Boston Globe story presents the testimony of Donald Larking, a friend of Tamerlan Tsarnaev. According to Larking, Tamerlan was a kind, gentle, pious individual - and a 9/11 truther.

It should go without saying that Muslims who understand that 9/11 was an inside job would never, under any circumstances, carry out terrorist attacks targeting civilians. They know that such attacks serve the interests of the Zionists and the military-industrial complex, and harm the interests of Muslims.

The fact that the Tsarnaevs are 9/11 truthers is 100% slam-dunk-positive proof that they are innocent.

And the fact that Craft International, Inc. was caught red-handed planting the bombs is further proof, if any were needed.

It was a most unlikely friendship.

The elderly man was an invalid and a lifelong Catholic recently converted to Islam. The younger man was a robust Russian immigrant, as proud of his muscled physique as he was devout in his Islamic faith. But somehow in the back row of a Cambridge mosque over a series of Friday afternoons, the boisterous boxer and the suburban senior developed a rare connection.

“Tamerlan Tsarnaev was my friend and we talked about everything from politics to religion,” said Donald Larking, 67, who began attending the Islamic Society of Boston mosque in Cambridge a couple of years ago at Tsarnaev’s suggestion. “He was very, very religious. He believed that the Koran was the one true word and he loved it.” 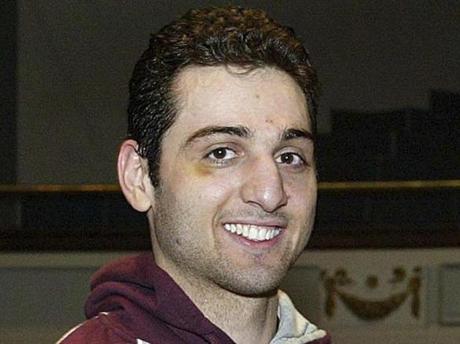 Larking has been identified in news media reports as a confidant of Tsarnaev, but he has never, until now, spoken publicly about their bond, and his apparent influence on the younger man. It was Larking who introduced Tsarnaev, who has been implicated in the Boston Marathon bombings and died in a shootout with police in April, to several right-wing publications colored by conspiracy theories.

‘He believed that 9/11 was an inside job and that the government had pulled it off.’ —Donald Larking, friend and confidant of Tamerlan Tsarnaev

Last year he gave Tsarnaev a subscription to The American Free Press, which has been criticized for promoting anti-Semitic conspiracy theories, for a Christmas gift. He also loaned his young friend his own copies of “The Sovereign, newspaper of the Resistance!” which suggests on its website that US military explosives were involved in the World Trade Center collapse. But Larking said that Tsarnaev, who was 24 when the two men met, had strong political views long before then.

“He believed that 9/11 was an inside job and that the government had pulled it off,” recalled Larking. “His mother believed that, too. He didn’t like George Bush for torturing prisoners, but he didn’t really like Obama either.”

Investigators have speculated that Tsarnaev and his younger brother, Dzhokhar, who has been charged in connection with the bombings, were probably inspired by extremist Islamic propaganda. But Tsarnaev’s conversations with Larking suggest the elder Tsarnaev may have had a more complex political world view, colored in part by his belief in domestic conspiracy theories. The FBI declined to comment yesterday.

Larking was introduced to the Tsarnaev family in 2011 when friends recommended Zubeidat Tsarnaev, Tamerlan’s mother, to help care for Larking’s wife, who is a quadrapalegic. Zubeidat, who supplemented her income with work as a home health care aide, worked for the Larkings in their West Newton home on weekends. At times, one of her sons covered her shift. When she returned to Russia last year, Tamerlan’s wife, Katherine Russell, took over the job.

Larking is also disabled. In 1974, according to the family’s lawyer Jason Rosenberg, Larking was shot in the head during a holdup of a convenience store where he worked as a manager. Larking suffered some loss of mental acuity and now speaks and walks with some difficulty, Rosenberg said.
In Larking’s several conversations with the Globe, his account seemed consistent and clear.

In recent years, according to Rosenberg, Larking has deteriorated emotionally and has become interested in anti-Semitic and conspiracy-minded websites. But Rosenberg confirmed the accuracy of what Larking said about his relationship to the Tsarnaevs.

Although raised a Catholic, Larking says he became disillusioned with his church years ago when it became the subject of sex abuse scandals, and he converted to Islam. Tsarnaev urged Larking to attend the Cambridge mosque, which he himself had begun to attend — albeit fitfully — a couple of years earlier.

Because of his physical disabilities, Larking sits on a chair in the rear of the mosque while others pray upon the floor. On the occasional Fridays that Tsarnaev was present for the afternoon service at the mosque, he frequently joined Larking at the end and helped him walk to a handicap van waiting outside to take him home. Tsarnaev fondly dubbed Larking “Dawud,” David in Arabic.
Tsarnaev also urged Larking to grow a beard saying, as Larking recalled it, “that all Muslim men needed beards. So, I said, ‘OK.’ ” When Larking began growing a beard, Tsarnaev came to his home every several weeks to trim and take care of it.

“He was very kind,” Larking said.

Katherine Russell, who married Tsarnaev in 2010, converted from Catholicism to Islam for reasons similar to his own, said Larking. Like him, she was deeply disappointed over the scandal that engulfed the church and she was worried that the daughter she had with Tsarnaev would not be safe in the church in which she had grown up.

“She wanted a church with more morals,” recalled Larking. “She felt the mosque would be a safer place for her daughter to go to nursery school.”

One of Tsarnaev’s stronger political beliefs was that America was too involved in the affairs of nations around the world and should mind its own business. He often criticized Obama for US intervention in Afghanistan and Iraq, Larking said. During the 2012 presidential campaign, Tsarnaev spoke in support of conservative Ron Paul, a fierce proponent of non-intervention overseas.
About a year ago, Tsarnaev handed his Cambridge landlord, Joanna Herlihy, a copy of the book, The Protocol of the Elders of Zion, a tract that purports to describe a plan by Jewish leaders to take over the world. Long ago discredited, it was first published in Russia over a century ago.

“This is a good book,” he told her, as she recalled.

Herlihy said she warned Tsarnaev that the book was seen as “propaganda.” Still, she took the book and tried to “plow through it” this past winter, committed to understanding it enough to have a “serious conversation” with Tsarnaev. However, she never did finish the book and feels badly she missed the chance to engage him, and perhaps dissuade him, from such extreme ideas.

“I’ve regretted it,” she said.

A voracious reader, Tsarnaev kept many of the publications Larking shared with him in his Cambridge apartment. But when federal investigators ransacked the place after the April bombing, some residents in the building noted with interest that they left behind some of Tsarnaev’s non-Muslim extremist readings.

“I think it’s interesting the FBI didn’t take them,” said Harvey Smith, a longtime tenant of the same building. “Maybe it’s because it didn’t fit into their thinking about him.”

Globe reporter Patty Wen contributed to this story.
Posted by Muslims for 9/11 Truth at 1:18 PM