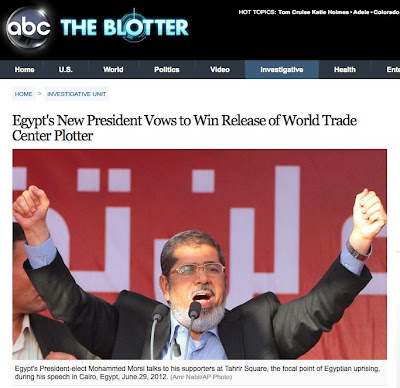 And he apparently also doubts the official story of the 1993 World Trade Center bombing.

""I see banners for Omar Abdel Rahman's family, and for prisoners arrested according to martial rulings and detainees from the beginning of the revolution...It is my duty to make every effort, and I will beginning tomorrow, to secure their release, among them Omar Abdel Rahman."

Omar Abdel Rahman, the so-called "blind Sheikh," was the patsy-in-chief set up to take the blame for the mobbed-up New York FBI office's bombing of the World Trade Center in 1993. (The FBI also orchestrated the 1995 Oklahoma City bombing, according to convicted bomber Terry Nichols.)

Even the New York Times, which led the cover-up of both World Trade Center bombings, cited tapes proving that FBI informant Emad Salem, who created and led the 1993 bombing plot, repeatedly discussed with his FBI handlers the fact that the FBI was responsible for the bombing:

"Do you deny," Mr. Salem says he told the other agent, "your supervisor is the main reason of bombing the World Trade Center?" Mr. Salem said Mr. Anticev did not deny it.  -NY Times

Many if not all of the Muslims who were falsely convicted of the FBI's act of terrorism were obviously innocent. Would Mohammed Salameh really have tried to get his $400 deposit back on the van used in the bombing if he had known about the plot? "Mohammed A. Salameh had returned three times to a Ryder Truck Rental dealer in Jersey City requesting a refund of the $400 cash deposit he had placed on a yellow Ford Econoline van." -Who Bombed the U.S. World Trade Center? — 1993  Growing Evidence Points to Role of FBI Operative  By Ralph Schoenman  (published in Prevailing Winds Magazine, Number 3, 1993)

Lynn Stewart, the lawyer for the innocent Muslims framed for the FBI's act of terrorism, was herself convicted on trumped-up charges in retaliation for her efforts to expose the FBI's terrorism and frame-up of her clients.
Posted by Muslims for 9/11 Truth at 6:45 AM 11 comments:

Add Mohamed Morsi to the lists of heads of state who openly support 9/11 truth. Presidents Ahmadinejad of Iran, Hugo Chavez of Venezuela, former PM Mahathir Mohamad of Malaysia, and Fidel Castro of Cuba preceded him. -KB

by Ben Birnbaum, The Washington Times

Egypt’s likely next president has long called for the U.S. to hold a “scientific conference” to determine the real culprits of the Sept. 11 attacks, having cast doubt on al Qaeda’s role in 9/11 for years.

“The U.S. administration has never presented any evidences on the identity of those who committed that incident,” longtime Muslim Brotherhood leader Mohamed Morsi is quoted as saying in a 2007 posting on Ikhwanweb, the Islamist group’s official English website.
“The Muslim Brotherhood and others demanded a transparent trial with clear evidence and to have court rulings,” he said after the sixth anniversary of the attacks that killed nearly 3,000 people. “We confirm that this isn’t a defense to those who committed these actions, but we only seek the truth.”

Mr. Morsi last week won the most votes in the first round of Egypt’s presidential election, and he is heavily favored to win a runoff this month against secular former Prime Minister Ahmed Shafik.

He is not the only candidate to have floated conspiracy theories about the Sept. 11 attacks: Abdel Moneim Aboul Fotouh - a former Brotherhood figure who finished fourth in last week’s race - said last year that he believed 9/11 was “part of a conspiracy.”

Mr. Morsi’s remarks underscore the challenges the U.S. likely will face in a Brotherhood-dominated Egypt. The group’s Freedom and Justice Party won 47 percent of the seats in Egypt’s parliamentary elections and is expected to play a dominant role in crafting a new constitution.

A call for proof

While condemning the 9/11 attack “regardless of its doer,” Mr. Morsi lambasted the U.S. response to them, calling the Bush administration “the world’s terrorism leader” and accusing it of getting “in line with Israeli occupation forces in aggression, injustice, encroaching lands and raping women.”

According to the Brotherhood website’s characterization of his 9/11 remarks, Mr. Morsi said the U.S. invaded Afghanistan and Iraq “due to the U.S. administration claims that the doers of the 11 September attacks [were] Muslims, without proving such a thing until now.”

In 2008, Mr. Morsi called on the U.S. to provide “scientific” proof for its account of events.

“We have officially demanded a fair trial for 9/11 suspects and the issuance of a detailed scientific report about the attacks, but the U.S. administration did not respond till now,” Mr. Morsi told Ikhwanweb.

“This requires a huge scientific conference that is devoted to analyzing what caused the attack against a massive structure like the two WTC towers,” he said, referring to the World Trade Center. “Should this happen, we will stand firmly against whoever committed this horrific crime against innocent civilians.”

(False! Bin Laden repeatedly denied responsibility for 9/11, deplored the attacks,  called them un-Islamic, and blamed "some people with their own agenda" and "American Jews" for the attacks in repeated statements before his death in December, 2001.)
Posted by Muslims for 9/11 Truth at 1:16 PM 2 comments: