Egyptian general Muhammad Khilf: 9/11 was an inside job

Speaking on Egyptian TV, retired Egyptian General Muhammad Khilf says 9/11 was an inside job, part of the plan to create a New World Order; ridicules the "hijackings" myth; discusses the "Angel is next" threat to Air Force One on 9/11 and attributes it to Zionist moles; touches on the evidence for the controlled demolition of the World Trade Center; and plugs 911truth.org. 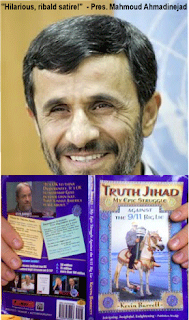 Source: U.K. Telegraph (For more evidence that Ahmadinejad has a sense of humor, click here. -KB)

Mahmoud Ahmadinejad, Iran's President, has denied reports that Osama bin Laden is in Tehran, and insisted that the al-Qaeda leader is, in fact, in the US capital of Washington.

"Rest assured that he's in Washington. I think there's a high chance he's there," the Iranian leader told ABC television in an interview. Without backing up the claim, the Iranian leader said he had "heard" that bin Laden was in the US capital.

"Yes, I did. He's there. Because he was a previous partner of Mr. Bush," he said referring to former President George W. Bush.

He added that, at any rate, US officials ought to know the extremist Islamic leaders whereabouts. "The US government has invaded Afghanistan in order to arrest bin Laden. They probably know where bin Laden is. If they don't know he is, why did they invade? Could we know the intelligence?" he asked ABC. "First they should have tried to find his location, then invade, those who did not know about his location first they invaded and then they tried to find out where he is, is that logical?"
Posted by Muslims for 9/11 Truth at 8:53 AM 5 comments: