On September 11th 2001 the tragic events in New York and Washington put all Muslims on trial. Politicians and media outlets spread Islamophobia to the American public. They created fear and hatred for every Muslim man with a beard, every Muslim woman with a head scarf, or anyone speaking a foreign language.

The word “terrorist” became synonymous with Muslims and no one else. According to my research, the definition of terrorism changed on 9/11. The media brandished this ugly word in an orchestrated smear campaign against 1.6 billion Muslims, using techniques designed to manipulate audience emotions.

A terrorist is defined in Merriam-Webster's © 2000 as : “a person or a group of people who use the systematic use of terror especially as a means of coercion.” But after 9/11 the New Dictionary of Cultural Literacy © 2005 defines it as: “Acts of violence committed by groups that view themselves as victimized by some notable historical wrong. They stage unexpected attacks on civilian targets, including embassies and airliners, with the aim of sowing fear and confusion.”

In reality, terrorism is not specific to one group or another; it is sometimes hard to distinguish who is and who isn’t a terrorist. As Gearld Spencer wrote in his book “Harry’s Game” (1975): “ One man’s terrorist is another man’s freedom fighter.”

The word terrorist isn’t about Muslims; it describes a small minority of people from all races and religious beliefs.

Someone sympathetic to Islam might respond with an example of Timothy McVeigh or the KKK. Yet the average American will continue to watch the mainstream media day in, day out and see pictures of “Muslim terrorists” flashed across the screen or spoken about for hours on the radio. 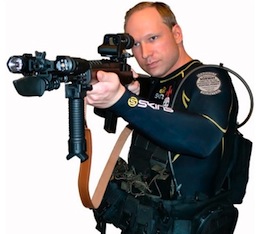 This is Anders Behring Breivik who on July 22nd 2011 dressed as a policeman and set off a series of explosions with a fully automatic rifle killing 93 people in Oslo Norway. Breivik's online 1500 page manifesto clearly stated his motives for this, as every media outlet called it, “murderous rampage” or “random act of violence” (not terrorism or terror attacks): his hatred of the “Muslimization” of his country had gone too far and he was calling on all conservative Christians to start the 4th Christian Crusade. He advocated deadlier attacks including ones involving the use of Weapons Of Mass Destruction, as reported on ABC World News on July 25th 2011.

The truth is that Muslims commit very little terrorism, compared to other groups. According to the FBI database there have been 318 terrorist incidents in the US from 1980-2005. That includes 209 bombings and 43 arson. Out of those incidents, 42% were committed by Latino groups, 24% by Extreme Left Wing groups, 7% by Jewish Extremists, 6% by Muslim Extremists, and 5% by Communists.

Remember the quote “One man’s terrorist is another man’s freedom fighter"? In 1985, then-President Ronald Reagan received a group of bearded men wearing turbans and looking very mean. After the meeting Reagan said: “These are the moral equivalent of America’s founding fathers.”

The men the President was speaking about were the Afghan Mujahiddin now known as Al Qaeda.

You may be reluctant to consider the Founding Fathers as terrorists. But their violence was intended to frighten or terrorize enemies. As Ted Robert Gurr writes in Violence in America: Protest, Rebellion, Reform: “Physical violence was commonly used and some groups used torture and lynchings to intimidate and punish Loyalists.”

We as Americans don’t see these as acts of terrorism, but as the acts of freedom fighters, even though England was the ruling government at that time. By today standards they would be terrorists. According to the 2005 definition discussed earlier and The U.S. Code of Federal Regulations (28 C.F.R. Section 0.85) terrorism is "the unlawful use of force and violence ... to intimidate or coerce a government ... in furtherance of political or social objectives.”

So what does Islam say about terrorism?  At the time the Qur'an was revealed (7th century A.D.), there was no United Nations or Amnesty International to keep the peace or expose injustice. Inter-tribal violence and vengeance were commonplace. Nevertheless, the Qur'an repeatedly urges forgiveness and restraint, and warns believers not to "transgress" or become "oppressors." For example:  Chapter 6 verse 151 "...and do NOT take any Human being's life - the life which God has declared to be sacred - otherwise than in pursuit of justice: this has He enjoined upon you so that you might use your reason!”   The Quran clearly forbids us to take any human being's life either Muslim or non-Muslim, unless it be “in pursuit of justice” meaning punishing someone for committing murder or in self defense.

So why do alleged Muslim terrorists usually receive the most coverage despite the fact that they are near the bottom of the list when it comes to terrorist activity - and their religion forbids terrorism?

Now that the facts are clear, do you think anyone would dare to rephrase the statement and end with “almost all terrorists are…” Latinos, leftists, environmentalists, Christians, Sikhs or Jews? I doubt it. This twisted logic is only applied to Muslims, not anyone else. So next time you hear of a “terrorist,” think of the facts behind the perceptions, not the images from the media infiltrating your mind. As a famous statement goes: “Image is everything.” Indeed, everything but the truth.
Posted by Muslims for 9/11 Truth at 8:40 AM 5 comments: