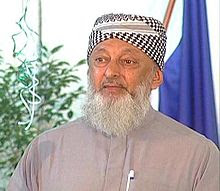 Sheikh Imran Hossein (interviewed by Kevin Barrett of M911T here) was one of the first notable Islamic scholars to speak out for 9/11 truth. Below is a transcript from a talk he gave in 2003. Sheikh Imran is one of the most knowledgeable and trustworthy voices in the Islamic world, and his courage and understanding of history and current events are evident in this series of videos.

"On September the 11th, the United States was attacked. We know from eyewitnesses that there were two aircraft that struck the Twin Towers in Lower Manhattan. And it could be that the aircraft themselves caused the buildings to collapse. It could also be that they got some help from some dynamite that was planted in them before.

"We know from eyewitnesses that there was a third aircraft which crashed in Pennsylvania. And no less an authority than the White House itself confirmed that the plan was for that aircraft to target Air Force One and to target the White House. And we have unconfirmed reports, because no-one saw (the crash) and there was no evidence on the ground.

"Absolutely astonishing, isn't it? A huge aircraft slams into a building, and there is no evidence the aircraft ever existed! (laughter) (I'm talking about) the Pentagon.

"America was attacked in circumstances which were absolutely suspicious. Who attacked America on September 11th? We have said that there is a massive cover-up on the part of the Bush Administration. And we have anticipated that those who have information so far concealed will eventually release that information in order to embarrass the US government as part of a strategy to bring down America. And so CNN is going to be broadcasting it. And the New York Times is going to have a field day. And all those who control the media in the United States are now going to go to work to lavishly publish all this information which demonstrates beyond doubt that the US Administration was involved in a massive cover-up.

"Who attacked America on September the 11th? We used a method. We said, since we do not have the evidence which can be used in a court of law, let us look to see who has benefited. And when we use that method of analysis, we have come to the conclusion that the only beneficiary of the September 11th attack on America has been, far and away, the state of Israel. There is a little booklet outside: "A Muslim response to the attack on America." It's just a little booklet twenty-five, twenty-eight pages. It's very cheap -- one or two dollars. I want to suggest to you it might be a good idea to take this booklet and give it out to people who you think ought to have a little bit of brainstorming. Because when they read this...they won't get this in their newspapers, and from their mainstream media in this country. But when they read this, I think they're going to have, some of them, an intellectual wake-up call. So that booklet is downstairs.

"We said that those who attacked America, therefore, must have, at their core, the Israeli Mossad. And they must have had benefit and help from many others within the Administration, within the United States, even from within the White House. When we look at their strategy, we see that they put on board the aircraft a large number of Saudis. Sounds suspicious! Why so may Saudis? And these are not Saudis who are well known for their Islamic fervor, for being what are called militants. No, these are middle-of-the-road normal Saudis who drive BMWs. People who attended American universities, for example. They were 'on board the aircraft,' and 'they died when the aircraft crashed,' so 'these were the hijackers' -- except that one of them read in the newspapers that he was dead! (laughter) So he went to the Saudi government and he said to the Saudi government, 'It seems to me as though I'm alive.' The Saudi newspapers published this article, which I read with my own eyes. This particular student had studied in Minnesota I think in the early 1990s. And in 1995 perhaps he had reported, both to the local police and to the Saudi Embassy in the United State, that someone had broken into his apartment and stolen his passport. They used that passport to hijack his identity, so they could 'put him on board the aircraft.'

"And so the planning for September 11th started many, many years before. Which reminds me, I must tell you that when I arrived in NY in April 1991 through Allah's leave and kindness within six months of coming to New York I had already been pushed to a very high-profile position in the NY metropolitan area. And then in November 1991, when I had gone to the State University of New York in Stonybrook, someone broke into my apartment...and stole only my passport. That's all. So if ever you get the news that Imran Hossein blew up the moon (laughter)...you'll understand the background. They're holding it. They have not as yet used it."

Imran Hossein pt 1 - Islam will be a strange thing in the world. Modernizing Islam thru espousing Wahhabi doctrination, so America can sit down & have breakfast with Islam.
http://m.youtube.com/watch?gl=CA&hl=en&client=mv-google&v=oqy6azq6MsY

Imran Hossein pt 2 - CNN (US media) will reveal the white house cover ups for the mega-ritual 9/11, Imran Hossein blows up the moon. See above transcript.
http://m.youtube.com/watch?gl=CA&hl=en&client=mv-google&rl=yes&v=VzKGbdBOyQs

Imran Hossein pt 3 - Israel & Saudi are sisters. The same forces erecting the the state of Israel are with Saudi. And the collapse of the US monetary system collapses the world of paper fiat currency.
http://m.youtube.com/watch?gl=CA&hl=en&client=mv-google&rl=yes&v=dQ0QHEdFHXA

Imran Hossein pt 4 - Israel territory expands, Palestinian people will be exported out, the massive human rights crime that the Israeli academics are anticipating & warning the world about.
Malcolm X had the insight about Dajjal. Al-Jazeera is a device for Arab/Muslim uprising.
(Please note these lectures are in 2003 foretelling what is happening now)
http://m.youtube.com/watch?gl=CA&hl=en&client=mv-google&rl=yes&v=iyne6roFFFU

Imran Hossein pt 5 - the same forces have been waging a war on Islam for a thousand years, Crusades (pludering Solomon's Temple getting the secrets of Harut & Marut that King Solomon hid there), destroyed the Caliphate, engendered Wahhabi & Saudi, and instated Israel.
http://m.youtube.com/watch?gl=CA&hl=en&client=mv-google&rl=yes&v=hBHE_vZJUvQ

Imran Hossein pt 6:
At the time of the drought of the Sea of Galilee the Son of Maryam will return. If we do not know the Qur'an then we have disrespected it & will pay the price! Do not turn towards the Jews & Christians in which they become your 'awilya (protectors).
Signs of the Hour: Sea of Galilee dries up. Happening now.
http://m.youtube.com/watch?gl=US&hl=en&client=mv-google&rl=yes&v=MqU4H__qv1E

Imran Hossein pt 7: Way of Islam is going to be gharib (strange) & increasingly difficult for anyone who wears a beard or dress. Firewater used with politics. People having sex in public like DONKEYS!
http://m.youtube.com/watch?gl=CA&hl=en&client=mv-google&rl=yes&v=RqSthFgOQeQ

Imran Hossein pt 8:
Muslim village... It will be one jama'at village, not a tablighe, salaafi, deobandi, etc. The Muslim village will be an island of Islam in a godless world.
http://m.youtube.com/watch?gl=CA&hl=en&client=mv-google&rl=yes&v=TQIsn2OI9j8

Imran Hossein pt 9:
You reap what you plant, if you don't plant then you won't reap. Well, how come banks are reaping the most?! They're reaping what others are planting! They're sucking the blood of the masses! Saudi built a 5-star masjid, yet, perform riba. Their ship is sinking! The Muslim village will build a masjid with mud walls & a thatch roof! Q & A.
http://m.youtube.com/watch?gl=CA&hl=en&client=mv-google&rl=yes&v=EPPJX9RALys
Posted by Muslims for 9/11 Truth at 7:46 PM No comments: 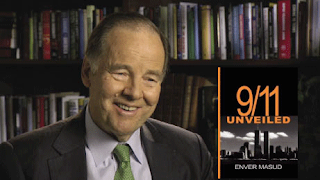 Kean's bookshelf will now include a copy of Enver Masud's 9/11 truth primer 9/11 Unveiled.


Enver Masud of The Wisdom Fund and Muslims for 9/11 Truth confronted Thomas Kean, co-chair of the 9/11 Commission, today at a hearing on "violent radicalization" in Washington, D.C. Enver gave his 9/11 truth book, 9/11 Unveiled, to Kean and other members of the group conducting the hearings. (Note: 9/11 Unveiled is now available in Arabic as well as English! Download it free here.)

Below is Enver's report. -KB

Mr. Kean is co-chair of the National Security Preparedness Group (NSPG) which which released a new report — “Preventing Violent Radicalization in America.”

Following brief remarks by Mr. Kean, Peter Bergen (NSPG member and Director of the National Security Studies Program at the New America Foundation), and Peter Neumann (Founding Director of the International Centre for the Study of Radicalisation at King's College London and BPC Visiting Scholar) offered brief comments on the report, and engaged in a discussion moderated by Siobhan Gorman, Intelligence Correspondent for the Wall Street Journal.

During the question and answer period, I rose to support Mr. Neumann’s recommendation for engaging with Muslim communities, and asked “which Muslim communities?” I added that groups such as the NSPG, and those in the US government, tend to engage with those Muslims who agree with them, and shun those that don’t. Dialog with only those who agree with you is not very effective.

I then handed copies of “9/11 Unveiled” to Messrs Kean, Nuemann, Bergen, and to Ms. Gorman. The book is a free download at TWF.org.

The event was filmed, and should be available for viewing later at the Bipartisan Policy Center.


Enver Masud
Founder and CEO
The Wisdom Fund
Posted by Muslims for 9/11 Truth at 1:05 PM No comments:

Kevin Barrett of Muslims for 9/11 Truth to speak in Germany, Belgium next week

Graphic depicting German poll showing that 89 % of Germans say NEIN to the official story of 9/11.


Dr. Kevin Barrett, co-founder and coordinator of Muslims for 9/11 Truth, author of two books on 9/11 and lead editor of another, will be speaking in Germany at private events organized by the Yeni Asya group next weekend, June 10th-13th.

The View from Turkey: USA Is Bizarro World 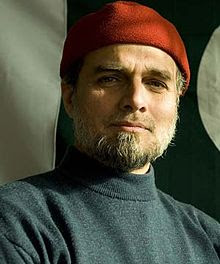 Pakistani TV personality and security expert Zaid Hamid spoke out quickly after the Mumbai 26/11 terror attack--and was smeared as a "conspiracy theorist" by the usual suspects. Now that India has learned that most of its "radical Islamic terror" was actually Hindu-Zionist false-flag terror, a growing audience recognizes Hamid as a truth-teller whose views must be respected and heeded.

NEW DELHI: Mumbai's 26/11 was actually a plan hatched by "Hindu Zionists" and "Western Zionists", including the Mossad, said a self-styled Pakistan security expert on a Pakistan news television show, uploaded on www.hotklix.com.

He said that the attackers wore saffron Hindu Zionist bands, which no Muslim would tie. Hamid also said that within the first 5 minutes of the attack, the three ATS policemen investigating the network of terror within India's security agencies and radical right were killed.

That ensured that those investigations reach a dead end. Anchor Qudsia Qadri added that with their killings, the investigations into the Samjhauta Express carnage would be halted. The killings also immediately shifted attention from India's domestic terrorists to Pakistan, said Hamid.

Marvi Memon, glamorous Pakistan Muslim League member, on the same programme, was appalled at the Pakistan government's expansion of the "India-appeasement package" by initially agreeing to send ISI chief to India. "I just don't get it," she exclaimed in exasperation.

She wondered how can you send the ISI chief to a " mulk jiske sath jang chal raha hai ...at a different level...," mentioning Kashmir and accusing India of blocking Pakistan's waters. Memon said, "They (Indians) are quite obsessed with anti-Pakistan speak and that unites them," she said. Memon also spoke about India's separatist movements and believed that India was only reaping the bitter harvest of the poisonous seeds it had sowed.