Whistleblower Kevin Ryan: Muslims did not attack the U.S. on 9/11 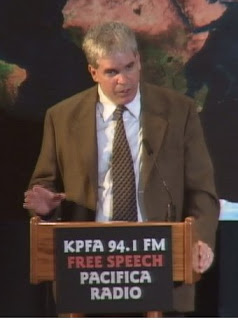 Chemist Kevin Ryan was fired from his job at Underwriters Labs in 2004 for blowing the whistle on UL's participation in the cover-up of the explosive demolition of the three World Trade Center Skyscrapers. He has continued to expose the 9/11 inside job through research, publications, and talks. He recently spoke alongside Richard Gage of Architects and Engineers for 9/11 Truth to an audience of more than 2000 people at the Nation of Islam's Saviour's Day event in Chicago.

Since September 11, 2001, the United States has initiated a number of wars in Muslim countries. These wars, which would be more correctly called massacres, have resulted in the deaths of countless innocent Muslims. In some cases, attempts have been made to present these aggressions in the guise of humanitarian efforts to promote democracy. But the limited public support for U.S. military action around the world goes back to the U.S. government claim that Muslims were responsible for 9/11. This claim is untrue and it is past time for people to recognize that fact. . .