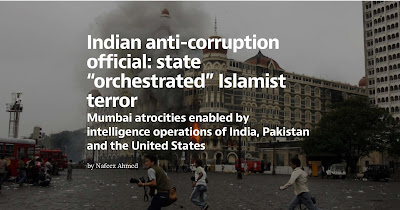 R. V. S. Mani, a former undersecretary in India’s home ministry now in the urban development ministry, testified in July that a senior police officer who investigated the 2004 ‘encounter killings’ of four Indian Muslims in Gujarat by the Ahmedabad Police Crime Branch, had told him that the 2008 Mumbai attacks were “set up” by the Indian government.

The police officer, Satish Verma — currently Principal at the Police Training College in Junagadh — is well-known for his secondment to the Central Bureau of Investigation (CBI), India’s elite anti-corruption law enforcement agency, to lead the probe into the 2004 ‘encounter killings.’