General Mirza Aslam Beg, Former Chief of Staff of the Pakistani Army: Wikileaks Is "A Tool of Psy Warfare" 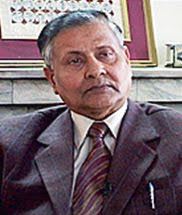 Gen. Mirza Aslam Beg is no stranger to power and the responsibility it carries - he formerly headed Pakistan's nuclear-equipped armed forces. He is obviously "in the loop" when it comes to intelligence matters affecting Central and South Asia. So when he charged, in Dec. 2001, that it was increasingly obvious that "rogue elements of the U.S. military and intelligence" had perpetrated the 9/11 attacks, and that Bin Laden was innocent, it should have made front-page headlines worldwide.

Now Gen. Beg is charging that Wikileaks, like 9/11, is a Zio-American intelligence operation - a weapon of mass deception.

Wikileaks: A Tool of Psy Warfare

The Wikileaks revelations confirm the obvious, more than what it informs us about the darker corners of ‘US diplomacy, cloaked in securitocracy.’ In fact, it is Cyber War, in the new game of psy-warfare, targeting individuals and countries, to cover-up the shame of defeat of war on Afghanistan, war on Iraq and 2006 Israeli war on Lebanon. The cyber war has been launched, impacting public opinion globally, and focusing on three objectives mainly:

One: To cause defamation of the countries which have had a role, direct or indirect, in the defeat of the Americans and their allies, in Iraq, Lebanon and Afghanistan, and create mistrust amongst them, so that they are not able to challenge future American plans in the region.

Two: To create conditions for a civil war in Afghanistan and out of the chaos and confusion, reduce Pakistan and Iran to subservience, something they have not been able to achieve during the last thirty years.

Three: To establish Indian hegemony over South Asia, including Afghanistan, and project American strategic interests in the region.

Arab-Muslim Public Opinion: 9/11 perps US and Israel - NOT 9/11-truth-seeking Iran - are the real threats 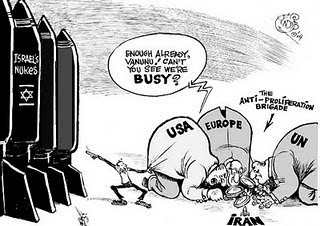 "Commenting on the revelations that several Arab leaders are urging the United States to attack Iran, Chomsky says, 'latest polls show] Arab opinion holds that the major threat in the region is Israel, that’s 80 percent; the second threat is the United States, that’s 77 percent. Iran is listed as a threat by 10 percent,' Chomsky says. 'This may not be reported in the newspapers, but it’s certainly familiar to the Israeli and U.S. governments and the ambassadors. What this reveals is the profound hatred for democracy on the part of our political leadership.'"

Iran Urges Trial of Those Behind 9/11

World Public Opinion poll: "On average less than one in four (Muslims surveyed) believes al Qaeda was responsible for September 11th attacks."
Posted by Muslims for 9/11 Truth at 6:54 AM 2 comments: