The murderous roots of takfiri sectarianism 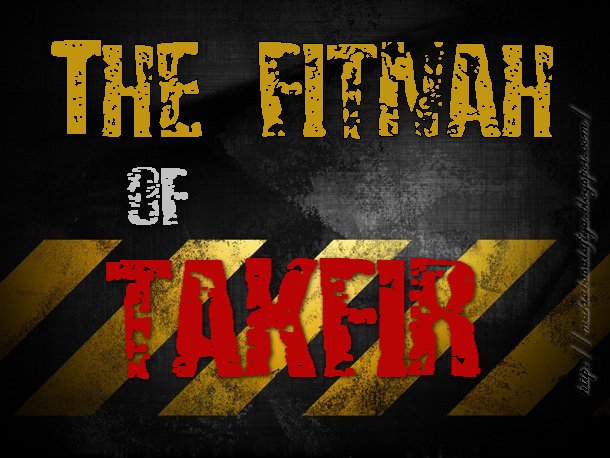 Who's behind the insane, murderous sectarianism that's spreading like a cancer in the Middle East?

So which Muslim power centers are complicit in Israel's Oded Yinon plan to balkanize the Middle East?

To find out, ask yourself: Who is exposing 9/11, and who is covering it up? Who is resisting Zionism, and who is tacitly cooperating with it?

The Zionist-occupied puppet states - the Gulf monarchies - were junior partners in Israel's attack on America on 9/11/2001. They are propping up the Rothschild petrodollar. And today, they are doing Israel's bidding by broadcasting takfiri messages (presumably both subliminal and conscious) designed to brainwash sunni Muslims into hating Shi'a Muslims.

The lunatics who are trying to "kaffirize" their fellow Muslims are the ones placing themselves outside of Islam. To borrow a phrase from FDR: The only thing we have to takfir is takfir itself.

The tendency among some Muslims to insist that their particular understanding of Islam is the only correct way has caused numerous problems. These are compounded by rigidity leading to unnecessary conflict when Muslims should be tolerant of different approaches.

Every Muslim sincerely and consciously commits to the One God — Allah (swt) — the Prophet Muhammad (pbuh) as the last and final messenger for all humanity, and the Qur'an as the revealed word of Allah (swt) to guide humanity till eternity. Problems arise in the Muslims' selective understanding and application of Qur'anic teachings and the role of the noble Messenger (pbuh) in their lives. This is further complicated by some Muslims' insistence that their particular understanding is the only legitimate way to interpret and implement Islam in real life. When such attitudes harden into fanaticism, it leads to disunity among Muslims and divisions in the Ummah.

Many different approaches can be identified but the most serious differences exist among those Muslims that are striving to establish Islamic states in their societies. Is there only one way to achieve this? Often adherents of different approaches seem to think theirs is the only correct way and all others are wrong. Our readers know where we stand. Our position is clear from our writings in this magazine as well as from our other works such as the tafsir of the noble Qur'an by Imam Muhammad al-Asi or the books we have produced on the Sirah of the noble Messenger (pbuh). But we also take the position that no matter how strongly we may disagree with other Muslims' point of view we do not exclude them from the fold of Islam or from adding their views to the larger ferment of Islamic ideas.

Denouncing other Muslims as kafirs has regrettably become fashionable among some groups (the takfiris). They go further: based on such denunciation, they think it is permissible to kill the Muslims so identified. Such behavior has no sanction in the Qur'an or the Sunnah and the Sirah of the noble Messenger (pbuh). There are a few conditions in which killing others (anyone) is permitted: three of these include engagement on the battlefield, treason, and the murder of an innocent person. In the latter case, the Qur'an stresses forgiveness over revenge.

So how did Muslims end up with this strange takfiri ideology that is spreading like a virus in the Ummah? A closely related phenomenon is that of sectarianism. It is used to create hatred against a targeted group of Muslims to justify acts of violence against them — including killing them. Muslims would do well to identify the forces that are pushing them toward sectarian warfare: imperialism and Zionism. True, different sects have always existed among Muslims but their differences never took on the virulent form it has taken on today. Whose interest does it serve for Muslims to fight each other? Let us be blunt: some Muslims that call themselves Sunnis are busy instigating hatred against other Muslims that carry the Shi`i label. This is most clearly visible in places like Syria, Iraq, Lebanon and Bahrain. The launch of this campaign can be traced to the success of the Islamic Revolution in Iran, a Shi`i majority country, in 1979. Iran's success exposed the fraudulent claims of the puppet Arabian regimes to being Islamic. The only way they could undermine Islamic Iran was by playing up the sectarian card.

Regrettably, some Sunni `ulama including those that have built a reputation for learning have also joined this campaign. Changes in Iran, Iraq and Lebanon have led them to describe these as the "Shi`i project." When a tyrant like Saddam Husain was in power in Iraq, many of these `ulama remained silent. Today, they seem to have fallen for the lure of comfortable living under the patronage of petro-rulers and joined their vicious sectarian game. Instead of urging Muslims to confront imperialism and Zionism and their local agents in the Muslim world, they are busy pushing Muslims into the flames of sectarianism.

We have no doubt that committed Muslims will ultimately triumph over the imperialists, Zionists and their munafiq agents in the Muslim world, as promised by Allah (swt) in the noble Qur'an (47:07, 61:13), but before that victory is achieved, Muslims would have paid a terrible price in life and blood. Committed Muslims have an obligation to properly understand the global reality and take the necessary steps to guard against all such schemes aimed at dividing them. Such divisions only serve the agenda of a more and more desperate West, whose policies have failed. Leading Muslim institutions, such as al-Azhar in Egypt, have a responsibility to come out clearly against such attempts at creating divisions and work for social and religious harmony among Muslims. Al-Azhar has a rich history of working to bring Muslims together. The legacy of Shaykh Mahmoud Shaltut needs to be revived and built on. Now is the time to do it.

Zafar Bangash is Director of the Institute of Contemporary Islamic Thought