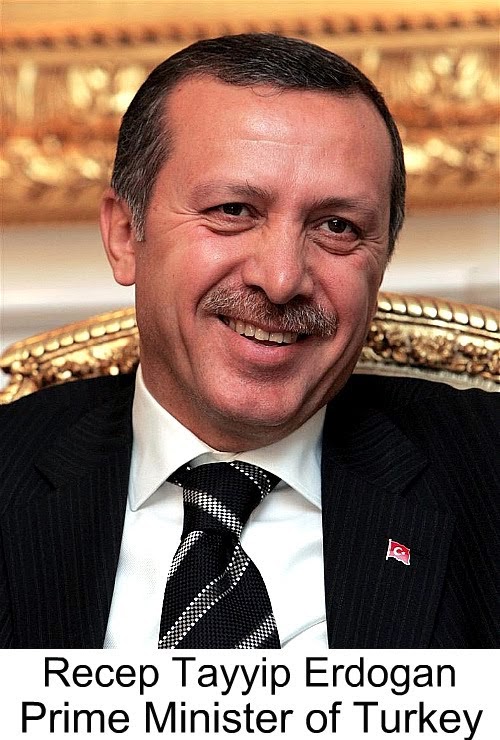 It was less than 48 hours ago when Turkey’s prime minister, Ahmet Davutoglu, joined millions marching in Paris to pay tribute to the 17 people killed by ISIS-supporting extremists. Then, almost the moment he got back, things changed, and as the FT politely paraphrases what transpired, the "country’s president struck a much more confrontational tone." That's one way of putting it. Another is that the former PM and current president, Recep Tayyip Erdogan, of NATO-member Turkey did the unthinkable: accused the west, and French citizens in particular, of staging the Charlie Hebdo murder in order to blame Muslims, even as the mayor of Ankara said "Mossad is definitely behind such incidents . . . it is boosting enmity towards Islam."
"The duplicity of the west is obvious,” Recep Tayyip Erdogan said at a press conference on Monday evening. “As Muslims we have never sided with terror or massacres: racism, hate speech, Islamophobia are behind these massacres.”
His punchline: "The culprits are clear: French citizens undertook this massacre and Muslims were blamed for it,” he added.
The FT is confused: "Although political leaders in Turkey have repeatedly condemned the attacks on the Charlie Hebdo magazine, a Jewish supermarket and a policewoman, a parallel narrative has emerged in the country, with conspiracy theorists blaming the murders on foreign intelligence agencies rather than radical Islamists."
It's not just the French who were said to be behind the attack: so is Mossad:

Melih Gokcek, mayor of Ankara for the ruling AK party, said on Monday that “Mossad [the Israeli intelligence service] is definitely behind such incidents . . . it is boosting enmity towards Islam.” Mr Gokcek linked the attacks to French moves towards recognising Palestine.

Ali Sahin, a member of Turkey’s parliament and foreign affairs spokesman for the AK party, last week set out eight reasons why he suspected the killings were staged so that “the attack will be blamed on Muslims and Islam”.

But back to Erdogan:

In his own remarks on Monday, Mr Erdogan added: “Games are being played throughout the Islamic world”. He expressed bewilderment that French intelligence services had not followed the culprits more effectively.

The FT is further confused that Turkey is not the only place which has dared to offer conspiratorial theories: Russia is too.

In Russia, some pro-Kremlin commentators sought to link the killings to geopolitical machinations by the US.

Komsomolskaya Pravda, one of Russia’s leading tabloids, ran the headline: “Did the Americans stage the terror attack in Paris?” and posted a series of interviews on its website that presented various reasons why Washington might have organised the attack.

In one interview, Alexander Zhilin, head of the pro-Kremlin Moscow Centre for the Study of Applied Problems, claimed the terror attack was US retribution against President François Hollande for a January 6 radio interview in which Mr Hollande urged the EU to lift sanctions against Russia.  Washington used the attacks as “a quick fix for consolidating” US and EU geopolitical interests in Ukraine, Mr Zhilin claimed.

The FT is most stunned that in Russia the events in Charlie Hebdo are being equated to the 9/11 tragedy:

“For the last 10 years, so-called Islamist terrorism has been under the control of one of the world’s leading intelligence agencies,” Alexei Martynov, director of the International Institute for New States, a think-tank, told pro-Kremlin internet outlet LifeNews. “I am sure that some American supervisors are responsible for the terror attacks in Paris, or in any case the Islamists who carried them out.”

Whatever could have given the Russian this idea...
Posted by Muslims for 9/11 Truth at 6:32 AM 1 comment:

This story brings back fond memories. My 9/11 truth tour of Turkey included a stop in Ankara, where we had private meetings in the capitol building with legislators and with the Turkish equivalent of FBI chief. The entire three-week tour included roughly 20 speaking events. During the entire visit, I only encountered one Turk who believed the official story of 9/11 – an audience member who voiced doubts about 9/11 truth in the Q&A after the talk in Istanbul. Everyone else, including the thousands who came to the various events, and the government officials I met, took it for granted that 9/11 was an inside job. -KB

Ankara Mayor Melih Gökçek has alleged that last week's deadly attacks on a French satirical magazine and a kosher supermarket in Paris that left 17 people dead are the result of France expressing support for Palestine, and that Israeli intelligence is behind the attacks, the semi-official Anadolu news agency reported.

According to a report from Anadolu circulating in the Turkish media, Gökçek attended the Justice and Development Party (AK Party) Gölbaşı youth branch fourth ordinary district congress on Sunday and mentioned the terrorist attacks in France. He said Israel was annoyed with the lower house of French parliament for voting for the recognition of a Palestinian state and with France's vote in favor of a United Nations Security Council (UNSC) resolution calling for the same recognition.

“Israel certainly doesn't want this sentiment to expand in Europe. That's why it is certain that Mossad is behind these kinds of incidents. Mossad enflames Islamophobia by causing such incidents,” Gökçek said.

He claimed that after the Paris attacks, around 50 mosques and some Muslim individuals had been targeted but such incidents were not reported on by the international media.

“Palestine being recognized as a state is why these [attacks] have taken place,” he concluded.

The Paris attacks, in which journalists and policemen were among those killed, began with a shooting at the satirical Charlie Hebdo newspaper on Jan. 7, and ended with people being taken hostage at a kosher supermarket on Jan. 9. The four victims killed in the supermarket attack were all Jews.

Gökçek, known for his controversial remarks, also recently claimed that black ice on the roads of Ankara, which caused more than 100 traffic accidents last month, was the work of unidentified people who deliberately turned on garden sprinklers by the roadside to cause ice to form.

Last summer, Gökçek also tweeted that the Israeli consulate in Turkey should be closed. “We don't want a representative of murderers in Turkey,” he said.

In 2013, he launched a Twitter campaign against BBC Turkish service journalist Selin Girit for her reporting on a meeting held by protesters at Yoğurtçu Park in İstanbul via social media, accusing Girit of being an "English agent" and of engaging in "treachery to her nation."
Posted by Muslims for 9/11 Truth at 7:13 AM No comments: