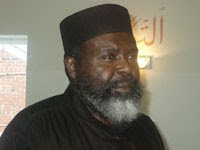 Imam Abdul Alim Musa of as-Sabiqun is one of the very few American Muslim leaders with the integrity to follow the Quranic injunction "keep the faith, work for justice, cling steadfastly to truth, and patiently persist." (And one of the few whose views are in line with the Muslim majority, both in the US and worldwide.)
Imam Musa will appear on Truth Jihad Radio (hosted by Kevin Barrett of Muslims for 9/11 Truth) today, 1/18/2011, 3 to 5 pm Central.

Watch him school Hannity on 9/11 truth among other things.

Can American Muslims Talk About 9/11?


Terrific article here by Kamron Memon of Muslims for a Safe America. I'll be inviting Kamron on my radio show.
-KB

Can American Muslims Talk About 9/11?

While many Americans of various faiths have opposed the U.S. government’s domestic and international “War on Terror,” American Muslims who have expressed their criticisms and doubts about these policies have often had their loyalty questioned.

It’s true that American Muslims care about their privacy and about Muslims overseas. But it’s also true that they don’t want to see America attacked, because America has given them freedom of speech, religious freedom, and the opportunity to make a living and take care of their families. In addition, the safety of American Muslims is intertwined with the safety of their American neighbors; American Muslims don’t want their families and friends to be blown up, which would happen if there are future attacks in the US. Furthermore, they don’t want to be victims of a backlash (discrimination, hate crimes, and restrictions on civil liberties), which would certainly follow future attacks in the US.

So why do so many American Muslims oppose U.S. government policies described as preventive measures against attacks on the US by perpretators portrayed as Muslims?

Many also believe that alleged plots discovered since 9/11 were set-ups by government informants, entrapping Muslims who posed no real threat to America. For example, skeptical Muslims cite the case of Shahawar Matin Siraj, who was found guilty of conspiring to blow up a NY subway station. Siraj claimed that he was entrapped by a Muslim informant, Osama Eldawoody, who was being paid by the NYPD. Siraj said the informant suggested the plot and incited him to act by showing him pictures of Muslims overseas being mistreated and by saying he had received a fatwa allowing Muslims to kill American troops. Wary Muslims also cite the case of Hamid Hayat, who was convicted of providing material support to terrorists by attending a terrorist training camp in Pakistan. Hayat claimed he was entrapped by a Muslim informant, Naseem Khan, who was being paid by the federal government. The informant encouraged Hayat to talk about fighting America, encouraged Hayat to attend a terrorist training camp, and cursed at Hayat when Hayat said he hadn’t yet attended the camp.

The Pew study found that 74 percent of Muslims in America don’t believe America’s “War on Terror” is a sincere effort to reduce international terrorism. The poll at the ISNA convention showed that 68 percent of American Muslims believe the American government is at war with the religion of Islam.

American Muslims hesitate to publicly discuss their views regarding what really happened on 9/11, because they fear being further isolated and marginalized; after all, mainstream media and political leaders tend to mock anyone who questions the official 9/11 story. American Muslims also fear the government will investigate them if they speak out. (Pew found most Muslims in America say life has become more difficult for their community since 9/11, and most believe the government singles out Muslims for scrutiny.)

In private discussions in mosques and Muslim homes, American Muslims often argue that no “real Muslim” would have carried out such attacks against civilians. Furthermore, they say, the 19 young Muslims accused of being the hijackers could not have pulled it off. They could not have snuck knives onto four planes, successfully hijacked four planes using just those knives, and then flown three of the planes — unchallenged by US air defenses — into three buildings including the military headquarters of the US. Many American Muslims believe someone else, someone better connected, hijacked the planes, or that the planes were crashed into buildings by remote control. They also believe the World Trade Center was ultimately brought down by explosives.

Angered by the American government’s perceived political and religious hostility towards Islam and Muslims before and after 9/11, skeptical American Muslims believe the government allowed 9/11 (or orchestrated 9/11) to justify greater domestic control over Muslims and invasions of Muslim countries.

This belief that the US government framed Muslims on 9/11 in order to justify further oppression of Muslims (including shutting down major American Muslim charities which used to benefit the poor in the Muslim world, and high-profile prosecutions of Muslims like Captain James Yusuf Yee who was wrongly accused of spying), creates significant tension and depression in the American Muslim community at the grassroots.

While the general public has never been polled about whether Muslims were involved in the attacks, many Americans have questions about 9/11. A 2004 Zogby International poll showed that 49 percent of New York City residents (whose city was attacked on 9/11) and 49 percent of New York State residents believe the US government had advance knowledge of the 9/11 attacks and allowed the attacks to occur.

A 2006 Zogby International poll showed that 42 percent of Americans believe that the US government and the 9/11 Commission concealed or refused to investigate critical evidence about 9/11, and 45 percent of Americans want Congress to re-investigate the attacks and whether any US government officials allowed the attacks. Ironically, few American Muslims are actively involved in the growing, self-proclaimed “9/11 Truth Movement.”

A 2006 Scripps Howard/Ohio University poll showed that thirty-six percent of Americans believe it is “very likely” or “somewhat likely” that federal officials either participated in the attacks on the World Trade Center and the Pentagon or took no action to stop them “because they wanted the United States to go to war in the Middle East.”

Does it matter that so many American Muslims, and other Americans, have such basic questions about such a significant event? Should the rest of the country care?

Our country generally marginalizes conspiracy theorists who reject the official story about any national tragedy, like the assassination of JFK.

So should America just write most American Muslims off as a bunch of kooks?

That would be risky.

To bridge the gap between American Muslims and other Americans, Muslim organizations (local mosques as well as national organizations) around the country can provide public forums encouraging American Muslims to openly discuss 9/11. Thus far, these organizations — concerned about political correctness and fearful of government investigations of those who take unpopular views — haven’t facilitated such discussions.

Of course, fearful American Muslim organizations will not take these steps unless the mainstream media and political leaders permit a safe space for discussion about these issues without marginalizing doubters as “kooks” or investigating them. The mainstream needs to “legitimize” the discussion for it to occur.

So what would these discussions, facilitated by Muslim institutions, involve? The same thing that segments of the country have already been discussing since 9/11.

For one thing, American Muslims (like many other Americans) need a history lesson. Many American Muslims are not well informed about the history of al-Qaeda and various attacks and plots around the world before 9/11. They don’t know about statements issued by al-Qaeda listing its grievances regarding American foreign policy. Nor are they familiar with the violent history of “jihadis” like Ayman al-Zawahiri. Many American Muslims had never heard of al-Qaeda, Osama bin Ladin, or Zawahiri before 9/11. So it looked to many American Muslims like 9/11 came out of the blue, and it looked to many American Muslims like the US government had simply created a Muslim bogeyman. Second, American Muslims need forums where they can raise all their technical and logistical concerns about 9/11, and get their questions answered. How did fires high above the ground cause the massive World Trade Center Towers to collapse? Why was the hole in the Pentagon wall apparently so small, and why is there no clear video footage of a plane hitting the building? Why didn’t fighter jets intercept any of the hijacked planes? Of course, many Americans have been publicly discussing these issues since 9/11, but American Muslims and their institutions have stayed out of these public discussions thus far.

Bringing these discussions into mosques and Muslim conventions will not erase all doubts. But it’s certainly much healthier for all doubts to be expressed openly rather than for them to be hidden, so that American Muslims can be exposed to various perspectives and new information. Regardless of how many minds are ultimately changed, American Muslims will feel more comfortable knowing their country is willing to hear them out. These discussions will be a useful outlet for letting out steam. And American Muslims may become more willing to go to bat for America, here and in the Muslim world.

And questions raised by American Muslims may encourage the country to further investigate nagging questions about 9/11, to help get the country on the same page.

Many other Americans may dislike the idea of letting unpopular American Muslims air their concerns about an issue as emotion-laden as 9/11. But it’s in America’s interest to bridge the gap between American Muslims and the rest of the country.

This article was originally published by Islamica Magazine in 2007.