Qur'an: "Strive for truth or be one of the losers" 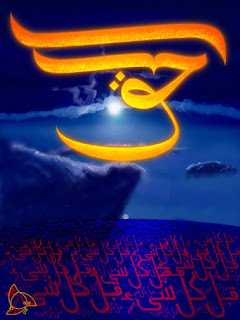 This just in from Zahir Ibrahim. Below is an abridged version. The full text, complete with engineering diagrams and flow charts, is here. -KB

The holy month of Ramadan, a joyous month of fasting and reflection, commences tomorrow (or the day after) worldwide for 1.6 billion Muslims. Perhaps while rushing to “finish” the recitation of the Holy Qur'an in this month for nourishing the starved soul, the hunger in the stomach from not eating all day will be matched with a hunger in the intellect for not thinking at all. Ramadan Mubarak.

Save those who believe,

and do good works,


The logic of the verses 2-3 is the AND conjunctive clause. Meaning, a concatenation of conditions joined by the AND clause (Arabic وَ ). Every one of the listed conditions in such a statement has to be individually true in order for the overall statement to be true. Otherwise the statement is false.

It doesn't matter how many prayers one offered and how many Hajj one performed to “believe” ( اٰمَنُوا );

or how many hungry mouths one fed, how many hospitals and schools one built, and how honestly one earned one's income and paid one's zakat to do “good works” ( عَمِلُوا الصّٰلِحٰتِ ) ;

if one didn't strive to oppose falsehoods and uphold “haq" (truth) ( حَقّ ), the life, even if otherwise piously and well-lived, is still one of “loss” ( خُسرٍ ).

I am not making this up. That's what the Holy Qur'an itself states, unequivocally – reflect on it yourself while further recalling the admonishment of the Author of the Book of Reflection:

'That this is indeed a Qur'an Most Honourable, In a Book well-guarded, Which none shall touch but those who are clean: A Revelation from the Lord of the Worlds. Is it such a Message that ye would hold in light esteem?' Holy Qur'an, Surah Al-Waqia, 56:77-81

Witness that the hardest thing to do in modern life is to stand up to oppression and tyranny ( وَتَوَاصَوا بِالحَقِّ ). And also to be patient in adversity when one is experiencing the jackboots of the new Nazis upon one's neck ( وَتَوَاصَوا بِالصَّبرِ ).

Whereas the easiest thing to do is to sit in a mosque, and/or to feed the hungry in atonement of a guilty conscience.

We already see what the pious Muslims worldwide tend to excel in. We pay our zakat on time, pray our namaz on time, and keep our fasts on time. Many among the oppressed are also incredibly patient in affliction. Indeed, we are so patient that we oft proclaim “Allah chala raha hai” (God is running the world), “Allah malik hai” (God is our provider), and often cry ourselves to sleep with utmost sabr (patience), repeating to ourselves with quivering lips and glistening eyes: “hasbun allahu wa naimal wakeel” (Allah is sufficient for us and most excellent is the Protector Arabic: حَسْبُنَا اللَّهُ وَنِعْمَ الْوَكِيلُ Holy Qur'an, Surah Al-e-Imran 3:173).

According to the testimony of Surah Al-Asr, take it any which you want, the fact remains that most of us are still in خُسرٍ unless we stand up to oppression and unequivocally affirm حَقّ to the best of our capacities. Silence and acquiescence to tyranny seems to be the antithesis to ( وَتَوَاصَوا بِالحَقِّ ). That seems to be the modus vivendi of the majority of Muslims today.

The crafting of that antithesis evidently has also come about courtesy of the imperial scholars subverting the meaning of the religion of Islam in the service of tyrants and kings throughout the ages, modernity being no exception. Language being its first corrupter. Thus, وَتَوَاصَوا بِالحَقِّ has been reduced to some nonsensical gibberish by the pious turbaned man on the pulpit to mean: just talk about it with utmost earnestness while occupying oneself in the mosque. Witness the 600-page one-sided Fatwa on Terrorism by the vaunted “scholar of Islam”, the posterboy of “moderate Islam”.

Liberating the meaning of the religion of Islam from the clutches of the so called scholars and jurists among Muslims is only as difficult as the uncongeniality of pondering the message of the Holy Qur'an directly, with one's own head and commonsense, rather than merely mouthing its melodic and soothing words which no doubt are magic to the soul.

But at the end of the day, only Allah is the final Judge of the extent to which we each did our own due diligence given our respective trials and tribulations, our bounties and blessings, on all four criterion for a life which only It shall Deem as “not in a state of loss”!

The holy month of Ramadan, a joyous month of fasting and reflection, commences tomorrow (or the day after) worldwide for 1.6 billion Muslims. Perhaps while rushing to “finish” the recitation of the Holy Qur'an in this month for nourishing the starved soul, the hunger in the stomach from not eating all day will be matched with a hunger in the intellect for not thinking at all.