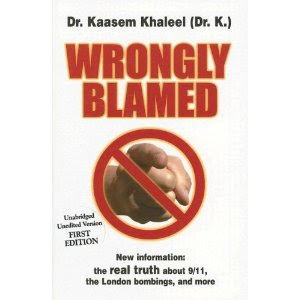 Dr. Kaasem Khaleel (Dr. K.) is the author of over 20 books including Science in the Name of God, The Words of Muhammad, and The Magnificent Message. An investigative reporter, historian and expert in health and natural healing, his book Wrongly Blamed: The Real Facts Behind 9/11 and the London Bombings exposes the Zio-American network of false-flag terror responsible for the ongoing blood libel against Islam and Muslims known as the War on Terror.
Posted by Muslims for 9/11 Truth at 1:38 PM No comments: 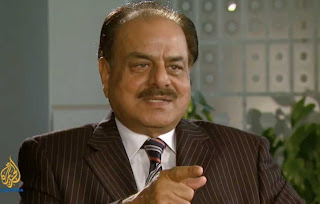 "American intelligence has failed in the past as you see, weapons of mass destruction and 9/11. Osama Bin Laden has not even been charge-sheeted. So they don't have any solid information on him."

"(The Pakistani Taliban) have been armed, given money, financed, supported and trained from across the border in Afghanistan by hostile forces, among them Indian intelligence, Mossad is there--Israeli intelligence, the Afghan intelligence itself of the Kabul regime, and of course they have provided material by the Americans."

Asked about Bin Laden/Afghan involvement in 9/11:

"Where is the proof of that? Mullah Zaif himself came to me when he was Ambassador to Pakistan. He said 'we have offered to the Americans, why don't you try Osama bin Laden? We will produce him for you, but he has to be tried under the shariah law, not under the American law. First of all, we have no faith in American law. Like in Dr. Aafia Siddiqui's case. Who has faith in American law? Who creates Guantanamo Bays, Abu Ghraibs, and rendition camps and torture flights, etcetera? American law, as far as their own citizens are concerned, may be very good. But American law to be applied to other nationalities, other people, is absolutely wrong. Now in the case of Aafia Siddiqui for instance, the American law says a jury of her peers has to be there. There was a jury, none of which was a Muslim woman wearing a hijab. They cannot understand that being strip-searched is such an indignity to a Muslim woman...so how can that jury give the right verdict? So basically there are flaws in the laws. Besides, their point of view was, that George Bush had said that he wants Osama dead or alive. That means punishment had already been announced on him. He wants him dead or alive. And I know that this is what George Bush said. So they said, 'Like hell, we will not allow this to happen, because he has taken an oath of allegiance on the hand of Mullah Omar, and therefore from every point of view, from any angle of law, he's a citizen of Afghanistan. We shall not hand him over to American law.'"

"In the year 2000 they did not allow me (to visit the UK). That means they were planning at that time (the events of) 2001. 2001 in my opinion is a mystery, it's an enigma. It needs to be resolved. And this is a very basic question: Was it al-Qaeda who carried it out? Osama bin Laden is twice on record saying he didn't do that. Although he said 'I pray for the people who carried it out, but I didn't do it.' So that mystery is still to be resolved. Besides, the whole operation was planned in Hamburg, Germany. Why was Afghanistan attacked? So there are al-Qaeda groups now in France, the U.K., and everywhere else, so each of these countries must be attacked? I don't agree with this. This is totally wrong, the world community was fooled, they were coerced, they were arm-twisted into cooperating. And I think this is where the Americans went wrong." 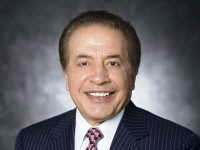 One of the Democrats running for governor in Texas says he also has questions about the involvement of the U.S. government in the 9/11 attacks

Democratic Texas gubernatorial candidate Farouk Shami said Friday that like his GOP counterpart Debra Medina, who later backtracked on her comments, he also has questions about the involvement of the U.S. government in the 9/11 terrorist attacks.

In an interview with Dallas television station WFAA, Shami said Friday "I'm not saying yes or no, because I don't know the truth."