Moeen Yaseen Speaks out for Peace and Truth 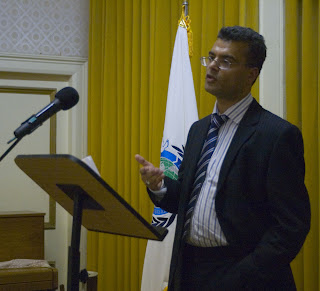 "This warfare economy is a parasite which manipulates fears and paranoia; it trashes economies by diverting resources from domestic investment into productive uses such as green technologies and subverts university research massively. It reduces economic growth and employment. Indeed the 9/11 attacks on the US homeland were used as a Cassus Belli and for the establishment of a National Security State. The Global War on Terror manipulates fears; keeps us afraid and stops dissent. As far as 9/11 is concerned our thinktank rejects the official narrative as Alice in Wonderland mythology and supports the notion of the existence of the phenomenon of State sponsored false flag terrorism."

"Moeen Yaseen, the convenor and Managing Director of Global Vision 2000 is a leading independent Muslim visionary and catalyst with a track record of 20 years experience in Islamic thought and action in the UK."
Posted by Muslims for 9/11 Truth at 1:11 PM