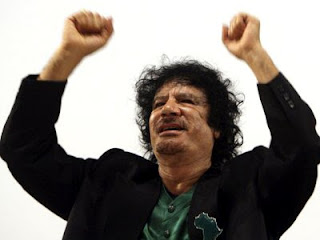 Libyan leader Muammar Qaddafi, in his extemporaneous remarks before the General Assembly on September 23 said that Lee Harvey Oswald assassin Jack Ruby (aka Jacob Rubinstein) was an Israeli intelligence agent who was involved on the behalf of Israel to assassinate President John F. Kennedy in 1963. Qaddafi claimed that Kennedy was prepared to expose Israel's nuclear weapons development facility at Dimona in the Negev Desert and Israel ordered Kennedy's assassination.

Qaddafi's remarks in a one and a half hour-long speech are the talk of the hallways, cafeterias, and smoking areas at UN headquarters. Qaddafi's speech has outweighed President Obama's maiden speech on the delegates' interest meters.

Those who were hoping for [9/11 truth supporter] Iranian President Mahmoud Ahmadinejad to engage in polemics over "Holocaust denial" were sorely disappointed. In his remarks, punctuated with Islamic religious references, Ahmadinejad had a message for the United States and its allies vis a vis the situations in Iraq and Afghanistan: "It is no longer possible to bring a country under military occupation in the name of fight against terrorism and drug trafficking while the production of illicit drugs has multiplied, terrorism has widened its dimensions and has tightened its grips, thousands of innocent people have been killed, injured or displaced, infrastructures have been destroyed and regional security has been seriously jeopardized; and those who have created the current disastrous situation continue to blame others. How you can talk about friendship and solidarity with other nations while you expand your military bases in different parts of the world including in Latin America. This situation cannot continue. It is all the more impossible to advance expansionistic and inhuman policies on the basis of militaristic logic."

Ahmadinejad added, "By the grace of God, Marxism is gone. It is now history. The expansionist Capitalism will certainly have the same fate." Ahmadinejad's remarks came just before the G20 industrial countries' leaders meet in Pittsburgh.

To repeat from UN headquarters, while Obama's speech was received well by most of the delegates and media, it is Qaddafi who is the star of this show. As one Iraqi reporter told this editor, "it's the first time the UN heard a speech from a leader who didn't feed them bullshit but the unvarnished truth."

(subscribe to Wayne Madsen Report, which takes up where Seymour Hersh left off, here)

See also Raw Story's In UN speech, Gaddafi suggests Israel behind JFK assassination:
"Libyan leader Moammar Gaddafi called for a reopening of the investigations into the assassinations of John F. Kennedy and Rev. Martin Luther King, Jr., during his speech at the UN on Wednesday, and pointed the finger at Israel in Kennedy's death."

U.S. mainstream media version: US, France walk out during Ahmadinejad's UN speech
Posted by Muslims for 9/11 Truth at 5:14 AM