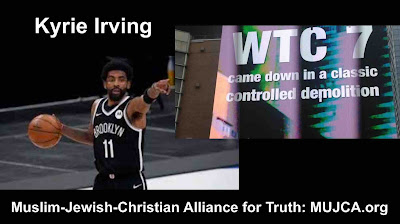 First, let's get one thing straight: I won't be cheering for Kyrie Irving when the Nets face the Milwaukee Bucks in the NBA playoffs. When Kareem Abdul-Jabbar played for the Bucks (1969-1975)   I was a kid growing up in Pewaukee, just outside Milwaukee. Kareem was obviously a very bright, independent-minded guy, much smarter than most of the journalists and other fools who were endlessly annoying him. Between that and his monstrous basketball talent I couldn't help liking the guy and cheering for his team.

When your two top childhood & early adolescence sports heroes (Kareem Abdul-Jabbar and Muhammad Ali) are Muslim, you can't help absorbing some positive feelings about Islam. So give Kareem some credit for nudging me toward the Straight Path, as-sirat al-mustaqim.

Now the Bucks have another monstrously talented big man, Giannis Antetokounmpo, a.k.a. the Greek Freak, backed by an even better supporting cast than Kareem had. So I occasionally reconnect with some of the happier moments of my youth by watching Giannis & co. do their thing. I hope they kick the Nets' collective rear ends up and down the court. I hope Kyrie Irving will "fear the deer," not stomp it.

OK, so I have established that I'm no great friend of Kyrie Irving. But I respect him—not just for his basketball greatness, but for his strength of character. Kyrie towers above the drunken Celtics fans and Twitter mobsters and media morons and the rest of the lynch mob that's so stupidly mistreating him.

Take NBC—please. Owned by the military-industrial complex, it's one of the worst lamestream media propaganda factories in the land, which is saying something. For NBC propagandists, of course, truth is a "conspiracy theory." When someone as well-known as Kyrie Irving gives 9/11 truth a big thumbs-up, the MSM mighty wurlitzer quickly responds to distort and obscure his message:

The lamestream legacy media has learned that its audience knows it lies, thanks to the internet. So when Kyrie Irving says something sensible on a podcast... 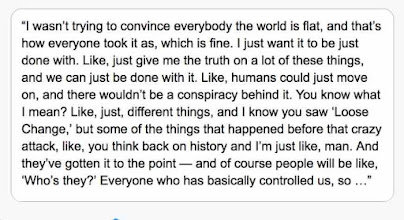 ...the propagandists try to spin it as a loonie flat-earth rant, dragging in a bunch of astroturf tweets to make it look like they have an army of sheeple bleating out approval of their lies.
But they can't hide the obvious: Kyrie makes a valid point. When we know they're lying so outrageously about 9/11—and anybody who has spent a few hours researching the obvious controlled demolition of WTC-7 knows that—then what else are they probably lying about? After more research, the answer is clear: pretty much everything.
Give Kyrie Irving some credit. He's willing to follow his heart—to New York to play beside his friend Kevin Durant, to the "internet Samizdat" unofficial media challenging the lies of American Pravda on 9/11 and so much more,  and to the Straight Path of Islam.
Irving, like Kareem Abdul-Jabbar and Muhammad Ali, will eventually get the respect he deserves. He already has mine.